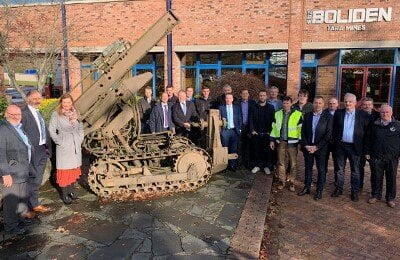 The first ever Geo Drilling Apprenticeship Programme, developed by Geoscience Ireland in conjunction with Institute of Technology Carlow, has been officially launched by Minister of State for Housing and Urban Development, Damien English, TD at New Boliden Tara Mine on the 11th of November.

Geo Drilling - the skilled use of a drill rig to advance holes for subsurface investigation work – is critically important to various sectors of the Irish economy, including quarrying; mining; groundwater research and abstraction; mineral exploration; geothermal energy development; site investigation for housing and infrastructure projects; and directional drilling for utilities. However, no formal qualification existed until now.

In 2017, Geoscience Ireland (a programme of Geological Survey Ireland) was asked by its drilling member companies to explore the development of a bespoke qualification for drillers working in Ireland. The absence of such a qualification was proving to be a difficulty when it came to acquiring work overseas, particularly in the United Kingdom. Commenting on the role which Geological Survey Ireland played in the development of the apprenticeship, its Director Koen Verbruggen said “In addition to assisting drilling companies to export their services to foreign markets, the Geo Drilling apprenticeship creates a formal pathway for new entrants into the drilling profession at a time when the demographic of the sector is ageing. The apprenticeship therefore is a positive development for the drilling sector in Ireland”.

SOLAS approved the proposal and work commenced on developing the course syllabus and recruiting both apprentices and employers. A steering committee made up of industry experts was assembled and this group oversaw the development of the apprenticeship programme. The steering committee comprised representatives of drilling and mining companies, Geological Survey Ireland, Irish Water, SIPTU, National Federation of Group Water Schemes, Irish Mining and Quarrying Society and Institute of Technology Carlow.

According to Dr. Frances Hardiman, Head of Faculty of Engineering at Institute of Technology Carlow, there is already significant interest in the Geo Drilling Apprenticeship Programme from mining and quarrying companies and drilling contractors, with apprentices starting in 2019 from Boliden Tara Mines, QME Mining, Lenihan Well Drilling, Irish Drilling and Geological Survey Ireland.

“It is exciting to be adding the Higher Certificate in Science in Geo Drilling to the suite of new apprenticeships on offer in Ireland and expanding our apprenticeship portfolio in IT Carlow to include a necessary qualification in a huge industry,” commented Dr. Hardiman.

Sean Finlay Director, Business Development, Geoscience Ireland is the chairperson of the steering group: “Companies with qualified Geo Drilling Apprentices will have a competitive advantage in domestic and export markets. Framework requirements for drilling by state and semi-state utilities and agencies, such as Irish Water, will increasingly require higher standards, including the provision of accredited and qualified drilling personnel”.

Eoghan O’Neill, Manager of Human Resources at Boliden Tara Mines commented, "It is important that such a skilled discipline as drilling has a formal qualification, this is important not only for the individual but also for the company as it demonstrates investment in the development of skills and quality”.

The Level 6 Higher Certificate qualification will enhance the quality of services drillers can provide to clients in Ireland and overseas. Delivered by the Faculty of Engineering at Institute of Technology Carlow, the Geo Drilling Apprenticeship is a two-year programme combining work experience with academic study. Apprentices will work with employers for 41 weeks and attend classes four days a week for 11 weeks. Application is open to school leavers and mature learners, aged 16 years or older.