It’s widely understood that Earth’s lithosphere (or outer crust) is made up of moving slabs of rock, better known as the tectonic plates.

These plates only move a couple of inches each year. However, these tiny movements add up over time and cause some of Earth’s most well-known phenomena. Today, the Earth looks a lot different than it did millions of years ago.

This graphic by Giulia De Amicis provides a brief explanation of plate tectonic theory and shows a map of the seven major plates. 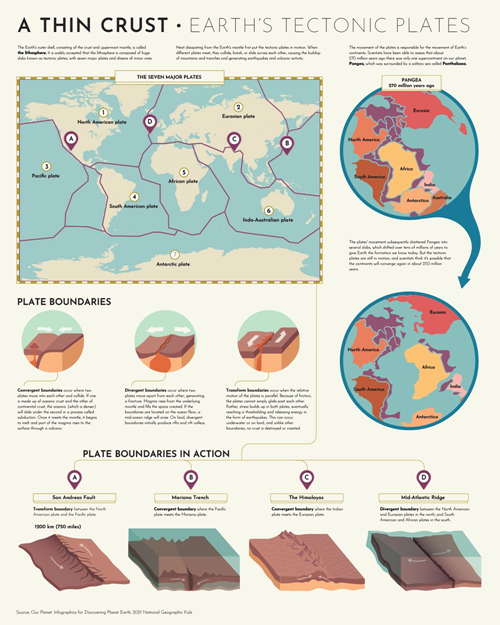 In the early 20th century, German geologist Alfred Wegener published a paper on his theory called continental drift—a hypothesis that Earth’s continents were moving across Earth, and sometimes, even colliding into one another.

According to Wegener’s theory, Earth’s continents were once joined as a single, giant landmass, which he called Pangaea. But over time, Pangaea broke apart and formed the continents as we know them today.

Wegener couldn’t explain why this phenomenon was happening, so at the time, his theory was heavily criticized by his colleagues. But over the years, technological advances allowed scientists to study the Earth more closely, and geologists started to build on Wegener’s theory.