Dundalk Institute of Technology (DkIT) are proud to report that one of their graduates who is Dublin based post-rock/electronica artist wornoc (aka Conor Walsh) will release his new single ‘Tranquility’ this September featuring internationally renowned flute and whistle player Brian Finnegan from the band Flook!. 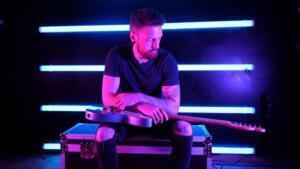 A graduate of the BA (Hons) Music at DkIT, Conor has carved out a niche in forward-pushing alternative-electronic sounds. Drawing on his experience specializing in Irish traditional music performance at DkIT, Conor has produced a single with one of Ireland’s leading traditional music innovators. With positive reviews from Rock Sound Magazine, BBC Introducing, RTÉ and Hot Press Magazine, it is clear there is something special and novel to Conor’s work. His music is cinematic, intense and emotional, described by 2FM’s Dave Hegarty as “Truly incredible music’.

Reflecting on his time at DkIT, Conor says: “With the Trad Ensemble, I learned so many great tunes that I wouldn’t have been exposed to. It’s cool to look back on the amount of tunes composed by Brian Finnegan who features on my new single that I learned, which makes the collaboration extra special. I met some of my closest friends in DkIT, one of which is part of the wornoc live band set up.”

Throughout his studies, Conor demonstrated his suitability for a career in music. Beyond his coursework, he completed a Summer Undergraduate Research Project at DkIT on the music of Monaghan-born Irish traditional musician and composer Brian O’Kane. He contributed to performances by DkIT ensembles in Ireland and abroad and, in addition to developing excellent performance skills as a guitar player across a range of genres, he has demonstrated a particular aptitude for music technology and creative approaches to music.

For more information on studying Music in DkIT Click here ...