Exhibition at Burren College of Art

Exhibition at Burren College of Art

Autarcheum is photographic-conceptual reflection on and a working through the massive ruin of an Italian-built thermo-electric power station and its ambivalent legacy. 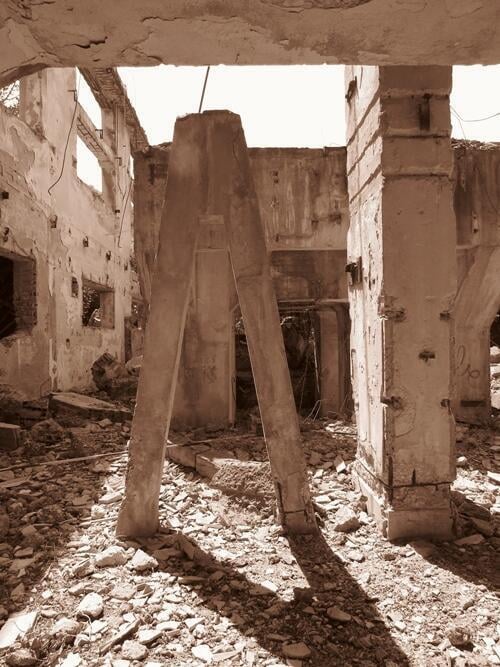 The Vlaška power plant began operating in the Raša Valley in Istria in 1939, as part of a large-scale industrialisation of a previously rural, marshy landscape. It supplied power to the mine in nearby Raša (Arsia in Italian). Raša was built in 1937-8 as a model industrial settlement and designed as a self-sufficient Città dell’autarchia (City of Autarchy). The plant was bombed by the Allies during World War 2, and restored when Istria became part of Yugoslavia, operating until 1976.

The exhibition title, Autarcheum, reflects its status as an autarchic mausoleum, full of ghostly traces of its workers’ efforts, and the political systems under which they laboured, willingly or otherwise. The location is both sulphurous and serene.

Cultural theorist, Alexei Monroe is currently a Research Fellow of Burren College of Art, and is the author of Laibach and NSK: The Interrogation Machine (MIT Press, 2005) and Autopsia: Thanatopolis (Divus, 2016). He was editor of State of Emergence: A Documentary of the First NSK Citizens’ Congress (Plöttner Verlag, 2012) and co-editor of Test Dept: Total State Machine (PC Press, 2015). His research interests include architecture, industrial and electronic music, dystopianism and the Stag as an art historical symbol.

cdx-foto is the photographic alias of Monroe, now based in Croatia. Since 2018, his photos have formed the basis of A/V performances by Sz. Berlin, including Towards a Concrete (Dys)Utopia (London, 2019), RZZ-22 (Nova Gorica, 2022) and SZB-22 (Berlin, 2022). His online exhibition The Tower – a study of an abandoned Brutalist block in London – was held at Martin Delaney Photography in November 2021. His 2015 photos of the doomed Birmingham Central Library were used in the Slovene book Nonument. His photos have been used for album and DVD releases by Eden Grey, Riotmiloo and Am Not. Entirely self-taught, his main photographic interests are architectural and industrial sites, as well as land and skyscapes.

Click here to read more about Art and Design ...