We’ve become remarkably good at it, too—to date, we’ve modified bacteria to produce drugs, created crops with built-in pesticides, and even made a glow-in-the-dark dog.

However, despite our many achievements in the realm of genetic engineering, one thing we’re still working on is bringing extinct animals back to life.

But scientists are working on it. In fact, there’s a whole field of biology that’s focused on reviving extinct species.

Using data published in Science News, this graphic provides a brief introduction to the fascinating field of science known as resurrection biology—or de-extinction. 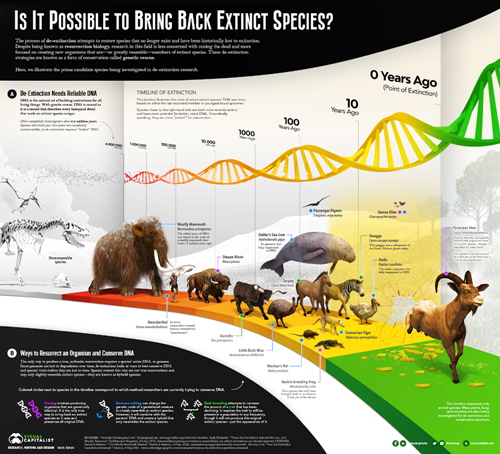 The Benefits of De-Extinction

First thing’s first—what is the point of bringing back extinct animals?

There are a number of research benefits that come with de-extinction. For instance, some scientists believe studying previously extinct animals and looking at how they function could help fill some gaps in our current theories around evolution.

De-extinction could also have a beneficial impact on the environment. That’s because when an animal goes extinct, its absence has a ripple effect on all the flora and fauna involved in that animal’s food web.