Tuesday, 20 September 2022: South East Technological University (SETU) has expanded its offering of agricultural programmes with the launch of four new degrees in Organic Agriculture and Agri-Systems Engineering at the National Ploughing Championships in Ratheniska, Co Laois.

SETU is a key player in land and food science higher education and research and the addition of these innovative undergraduate courses further bolsters a well-established course portfolio bringing the total number of land and food science programmes to 14 across the Wexford, Waterford and Carlow campuses.

Speaking at the launch, Dr Stephen Whelan, Programme Director said, “Our new organic agriculture programmes give students a unique opportunity to make a big impact on the organic industry. The BSc in Organic Agriculture is the only such degree being offered on the island of Ireland and we believe the honours version of the course is the only Level 8 degree in organic agriculture offered in either the UK or Ireland”.

The programme was developed in close consultation with industry, including the Irish Organic Association whose expertise were drawn on in the development of the organic modules on the programme.

Dr Whelan continued, “The agri-team in the Wexford campus are thankful to all those in industry who contributed to the development of the programme, especially Grace Maher from the Irish Organic Association who was heavily involved from the start”.

The BSc in Organic Agriculture will complement the existing BSc in Sustainable Farm Management and Agribusiness programmes with which it shares the scientific and business modules. It will be one of four agri/marine programmes that SETU offers on the Wexford campus, complementing the various land, marine and food science related programmes offered across the SETU.

The BEng in Agricultural Systems Engineering was also developed by working closely with industry.

Dr John Carroll, co-director of the programme together with Dr Anthony Nolan, said that “our vision for this programme is that it will create talented problem solvers for the agricultural industry, which is becoming increasingly mechanised and technical.

“Students on this programme will be able to take advantage of the best offerings in the Wexford and the Carlow campuses of SETU, capitalising on the agricultural expertise in the former and the engineering expertise in the latter.”

Similar to the Organic Agriculture courses, the BEng in Agricultural Systems Engineering programmes will share a number of agri-business and applied agriculture modules with the parent programme, the BSc in Sustainable Farm Management and Agribusiness. Students will take the engineering components of the programme in Carlow as well as learning from exposure to the many agri-engineering companies in the south east.

Both the BSc in Organic Agriculture and the BEng in Agricultural Systems Engineering will be offered at Level 7 and Level 8 and will have their first intake of students in September 2023. For more information please visit www.setu.ie. 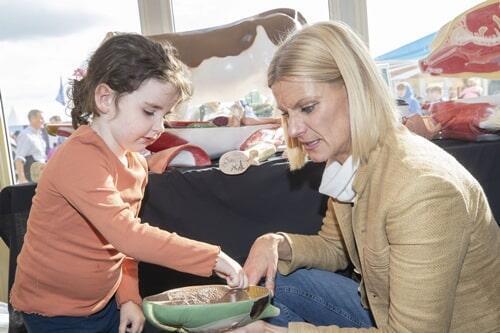 Ms Pippa Hackett, Minister of State for Land Use and Biodiversity in the Department of Agriculture, Food and the Marine pictured showing four year old May Joyce from Connemara Co Galway that a cow has four stomachs, at the launch of South East Technological University’s four new degree courses in Organic Agriculture and Agri-Systems Engineering at the National Ploughing Championships.